Competing against Northern Division winners, Norfolk, and Southern Division winners, Surrey, BB&O were hoping to add the League title to the England Boys Qualifier, which they won at Woodbridge Golf Club in mid July. The triangular format at the Finals was similar to that of the division matches, with 8 singles matches played in the afternoon. However, four foursomes matches were added for the Finals, though these were played over only 10 holes. Each match, therefore, was played with a total of 12 points up for grabs. 6 1/2 points was needed to secure victory against each of the two County opponents.

Surrey took control of the Finals with 3-1 victories over both BB&O and Norfolk, during the morning foursomes matches. BB&O, in turn, held a 3-1 lead over Norfolk. Sebastian Tannum-Donaldson, partnering Tom Gregory, provided BB&O's only points against Surrey, with some scintillating golf on holes 6,7 & 8. 1 behind, after 5 holes their birdie,birdie,par run was enough to establish a dormie lead, which would result in a much needed point. A 4-0 deficit at lunchtime would have deflated the boys, whilst giving Surrey the comfort of needing only 2 1/2 points from the afternoons 8 single matches. So at 1-3 down all was still to play for.

The singles order fell very nicely and gave us a lot of confidence, with every match winnable. Conor Gough out at No.1, Charlie Herbert, BB&O Junior Champion, at No.2, Tom Gregory at No.3 and Sebastian Tannum-Donaldson at No.4. Three of our first four boys are England Internationals and the other is the current Junior Champion.

Conor and Sebastian played flawless golf, dispatching their respective opponents. Tom Gregory was up against two classy opponents, one of them a fellow England International, and despite a run of three birdies in a row on the back 9, fell to crucial birdies from his opponents on both 16th and 17th holes. The narrowest of losses to both opponents was very, very tough on Tom. Charlie Herbert, 3 down after 5 against Surrey, closed the deficit to 1 down thru 8 holes, before losing the 10th and 11th holes. A second more decisive comeback ensued which saw Charlie win five holes in a row, three with birdies, to turn a deficit into a vital 3&1 victory. With three points in the bag, two and a half more points were needed from the remaining four matches for overall victory.

Melan Dhaubhadel, out at No.5, was pegged back to all square by his Surrey opponents two birdies and an eagle. Harrison Arnold remained firmly in control as his match entered the back 9 and he quickly added the fifth point. Only a half needed out of the remaining matches. Fraser Bown, again playing the anchor role, had established a comfortable lead as he approached the turn. A half or better was not guaranteed with so many holes to play. Taylor Paul, at No. 7, was in a very tight match with his Surrey opponent, with the match score never far from parity. Where was the much needed half point going to come from? Melan, all square with two to play, Taylor, in a tight match or Fraser, in control but with 9 holes to play? We didn't need to wait too long as Melan, from a really difficult lie in a grassy hollow, muscled a short iron to 10 feet; the subsequent birdie taking him 1up with one to play, thereby guaranteeing BB&O the 6 1/2 points for victory. What a comeback after a difficult morning. Melan would go on to win his match as would Taylor Paul after a magnificent birdie 2 on the 16th. Fraser Bown would complete a remarkable team turnaround by securing comfortable wins in both his matches. The 7-1 singles score against Surrey would see the final match score end 8-4 in BB&O's favour. Quite unbelievable!! The same singles winning margin would see BB&O defeat Norfolk by a margin of 10-2. 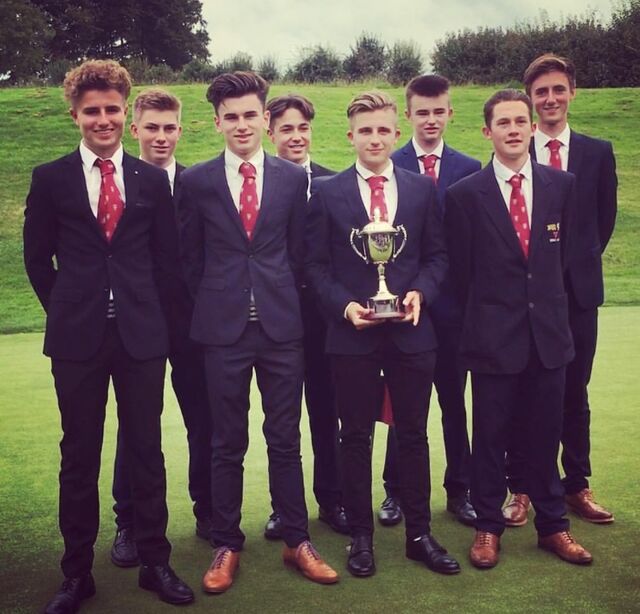